The Navigator allows fast scaling and moving of image areas as well as going back to the entire image view. Here you can see the reduced copy of an image. The frame shows the part of the image that is now visible in the Image Window; оther areas outside the frame are shaded. Drag the frame to make other parts of the image visible. To move the frame, bring the cursor inside the frame, press the left mouse button and, keeping it pressed, move the frame in Navigator. 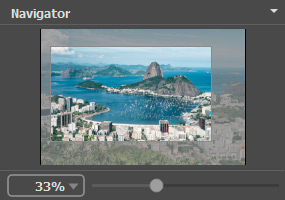 You can also change the image scale by entering a value into the scale field and pressing the button Enter on Windows, Return on Mac. The drop-down menu shows some frequently used values.

Standard scale presets are listed in the Image -> Scaling menu:

Fit Width (Alt+→ on Win, Option+→ on Mac) - the image is scaled to fit the window width;

Fit Height (Alt+↓ on Win, Option+↓ on Mac) - the image is scaled to fit the window height;

Fill Window - the image is scaled to fill the Image Window completely.

You can move the Navigator panel to any area of the screen, combine it with other panels, scale, or collapse.